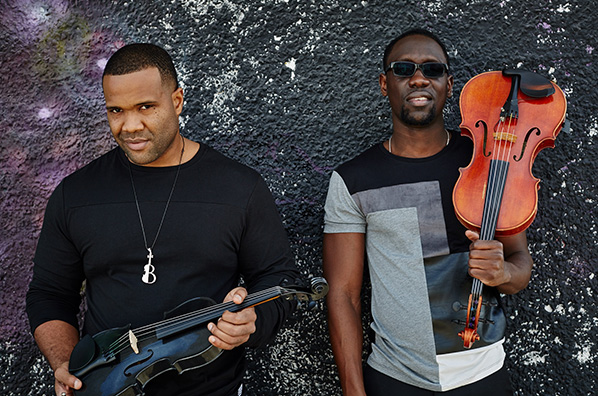 Black Violin features classically trained violinists “Wil B” and “Kev Marcus” at the center of a fiery, high-energy show that has brought them worldwide recognition. In its fast-climbing career, Black Violin has performed with Alicia Keys, Aerosmith, Tom Petty and Kanye West, and has appeared on HBO’s Ballers, The Tonight Show, The Tavis Smiley Show, The Wendy Williams Show, The Ellen Show and 2016 Heisman Trophy presentation on ESPN.

Black Violin’s dynamic duo, William Baptiste and Kevin Marcus, met while high school students in a performing arts program in Florida. There they began cultivating their love of hip-hop and classical music and an interest in the fascinating fusion that blend creates. After college, Baptiste and Marcus formed Black Violin, creating a remarkable genre mashup that has been described as “classical boom.”

As their fame has grown, Black Violin has not forgotten its roots. Baptiste and March devote much of their time to emphasizing the importance of educational outreach, performing for more than 100,000 students across North America and Europe over the past year.