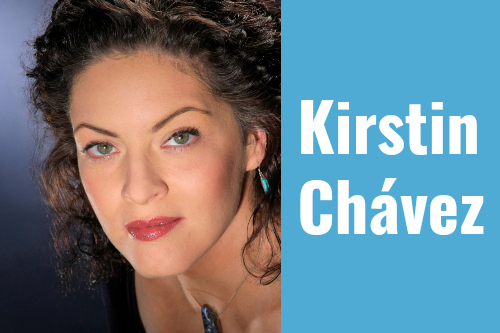 Kirstin Chávez is considered one of the most riveting and significant performing mezzo-sopranos today. Her powerful voice with its expansive range, the dramatic intensity of her acting, and her natural sensuality combine to make her an arresting and unique presence on the operatic and concert stages.

Ms. Chávez has captured attention and acclaim in her signature roles and is recognized as one of the definitive Carmens of today, creating her Carmen in nearly 40 different productions throughout the United States and around the globe. Opera News reported that her Carmen in Graz, Austria was “the Carmen of a lifetime. With her dark, generous mezzo, earthy eroticism, volcanic spontaneity and smoldering charisma, Chávez has it all, including a superb command of French and a sense of humor.” Ms Chávez has also showed great success in various pants roles, including Octavian in Der Rosenkavalier (Florentine Opera), Hansel in Hansel and Gretel (Atlanta Opera), and Orfeo in Gluck’s Orfeo (Metropolitan Opera).

Kirstin Chávez has earned praise for her performances in modern operas, as well, with her Jo in Adamo’s Little Women (Opera Pacific), Thérèse, in Tobias Picker’s Thérèse Raquin (San Diego Opera) and Sondra Finchley in Picker’s An American Tragedy, which was her Metropolitan Opera principal debut in 2005. Two more important modern roles she has recently added are Sister Helen Prejean in Dead Man Walking, of which the Tulsa World reviewer referred to her performance as “Searing and Incandescent,” and Sharon Falconer in Aldridge’s Elmer Gantry, of which the Tulsa World reviewer spoke of the “otherworldy quality to her singing; a mix of the earthy and the ethereal”

Ms. Chavez’ recent engagements have brought her to the Sydney Opera House in Australia as Carmen and the same at Opera Queensland, in Brisbane. She also made a role debut as Lucretia in Britten’s The Rape of Lucretia, at Maggio Musicale in Florence, Italy. Her subsequent travel to the United Kingdom, resulted in her debut with two major companies: The Welsh National Opera, as Carmen, and at The Royal Opera House in London with the role of Marquise de Merteuil in the contemporary opera Quartett by Luca Francesconi; a production with which she also then made her Swedish debut with Malmö Opera. And amidst engagements of her favorite roles and powerful new contemporary pieces, Kirstin is also branching forth into the heavier repertoire eagerly anticipating more performances as Amneris in Aida and then, surely, Dalilah in Samson et Dalila and Eboli in Don Carlos.

At present, Kirstin and several talented colleague/friends are busy building and preparing Kirstin’s ‘one-woman Carmen show’ called CARMEN—FIRE and FATE. This is a dream realized for Kirstin because it provides an outlet for her to share the depths and intricacies of the Character of Carmen who has come to be so much a part of her during her 20 year professional career. The first tour of this wild and fun show will be in the UK in June, 2017.

Kirstin is also well known on the concert stage, having performed in numerous oratorios and concert productions, including such works as Beethoven’s 9th Symphony, Mozart’s Requiem, Bach’s Magnificat, Rossini’s Stabat Mater, Verdi’s Requiem, the Mahler 2nd Symphony and Rückert Lieder, and Manuel de Falla’s “El Amor Brujo.” Now expanding her concert career, Kirstin is performing in recital through the United States and now in France and the UK with unique and engaging programs on subjects dear to her heart: Love, Nature, and songs from her Spanish heritage.
Kirstin Chávez was born in Albuquerque, New Mexico, but spent most of her formative years in Kuala Lumpur, Malaysia, where her parents worked as English and Music teachers. She received a Bachelor of Music degree, with Honors, from New Mexico State University, and a Master of Music degree in Performance, and the Performer’s Certificate, from the Eastman School of Music. After beginning an Artistic Residency with the Orlando Opera, Ms. Chávez won several major international competitions, including The Sullivan Foundation, The George London Foundation, the Licia Albanese-Puccini Foundation, the Opera Index Foundation, The Gerda Lissner Foundation, the Jensen Foundation, and the Metropolitan Opera National Council Auditions (National Finalist).

Free for FMU students and employees. $5 for general public