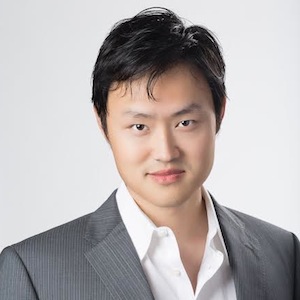 Shanghai born Baritone Yun Hao Jiang has appeared in several operas productions in Chicago, IL and Charleston, SC.  Some of his most recent roles include the Imperial Commissioner in Madame Butterfly, Betto and Marco in Gianni Schicchi, Armour Man in Die Zauberflöte and the title role in Don Giovanni.

Mr. Jiang was the first prize winner at the Evanston Music competition in 2012 during the same year he was also finalist in both Violetta Dupont vocal competition in New Jersey and Opera Columbus vocal competition in Columbus, Ohio. Mr. Jiang is also very active on the concert stages as a featured soloist. He has been heard in large choral works such as Orff’s Carmina Burana and Rossini’s Petite Messe Solennelle. Mr. Jiang received his Bachelor of Music Performance at the College of Charleston in 2010 and his Masters in vocal performance at the Chicago College of Performing Arts, where he worked with world renowned baritones such as Maestro David Holloway, Richard Stilwell and the legendary Samuel Ramey.

Currently, Mr. Jiang continues his work with a world distinguished tenor, Maestro Scott Flaherty while actively performing nationally and internationally. In addition, Mr. Jiang is a faculty at the Charleston Academy of Music in Charleston, SC. Internationally, she has performed in Suecia, Estonia, Dinamarca and all over South America in recitals, chamber music concerts and several international festivals with renowned soloists. Ms. Ferreira collaborated with conductors such as Stefan Lano, Ligia Amadio, Federico Garcia Vigil and Nicolas Rauss.

Currently, Ms. Ferreira is a faculty at the National School of Arte Lírico at SODRE Theater, as well as a vocal coach at the Solis and SODRE theaters of Montevideo, Uruguay where she resides with her daughter Isabella. Besides music, Ms. Ferreira enjoys photography and cooking.

Free for FMU students and employees. $5 for general public